Brachytherapy is a non-surgical method of treating cancer where we place tiny radiation sources directly into the prostate and tumour in order to kill the cancer cells.

The name comes from the Greek word for short distance and refers to the way that the radiation is contained so that it can only affect tissues in the immediate vicinity – hence, a short distance. This is opposed to other forms of radiotherapy that are more indiscriminate and can cause collateral damage to healthy tissue.

It has long been known that radiation can kill cancerous tumors. The problem has always been the effect the radiation can have on other healthy tissue.

Brachytherapy seeks to avoid damage to healthy tissue by delivering the radiation directly to the site of the cancer.

There are two ways we can achieve this, both fairly similar.

Both involve the placement of hollow needles directly into the prostate. This is done under general anaesthetic. An ultrasound probe is placed in the rectum to guide the urologist or radiation oncologist performing the implant procedure. Then needles are guided into the prostate between the base of the scrotum and the anus – an area called the perineum.

In this procedure, tiny radioactive pellets are placed directly into the prostate via the hollow needles.

The pellets comprise radioactive iodine enclosed in a metal case. They are about the size of the tip of a lead pencil – about 5mm long and less than 1mm thick. We place between 60 and 100 pellets into the prostate, depending on the size.

The pellets are placed so that they distribute the radiation throughout the entire prostate, with an increased dose to the area of your cancer.

The pellets release their doses of radiation rapidly at first, then slower over time. You receive half of the total dose over the first 2 months and by about a year, the radiation is virtually all gone.

The pellets then remain in place and do no harm.

The advantages of LDR brachytherapy include

The potential side effects of LDR brachytherapy include, but are not limited to,

Like the seed therapy, this procedure starts with needles being placed into precise positions in the prostate using an ultrasound probe and a needle template. Unlike the LDR procedure, with HDR brachytherapy the hollow  needles are left in the perineum. The patient is then transferred to the radiation department treatment room where a large dose of radiation is inserted directly into the prostate via iridium wires through the hollow needles.  The radiation is used for only about 10 to 15 minutes and then it is over. It has been shown that this high dose can kill the tumour cells and limit the damage to the surrounding structures, especially the bowel.

HDR brachytherapy is usually used for men with high grade, locally advanced prostate cancer that may not be candidates for cure with surgery. It is common for external beam radiation to be added to HDR brachytherapy in high risk cancer patients to improve the long term outcome.

Benefits of brachytherapy over other treatments

Am I a brachytherapy candidate?

Brachytherapy is only appropriate in a certain set of circumstances.

In general, my criteria for a low dose rate brachytherapy candidate are:

In general candidates for high dose rate brachytherapy are men with large volume high grade cancers, i.e. Gleason score 8-10, a PSA level of >10 and a palpable nodule in the prostate on rectal examination that appears to extend beyond the wall of the prostate. This group of patients are sometimes considered not suitable for surgery, especially in the older age group.

Each case is, however, taken on its merits. 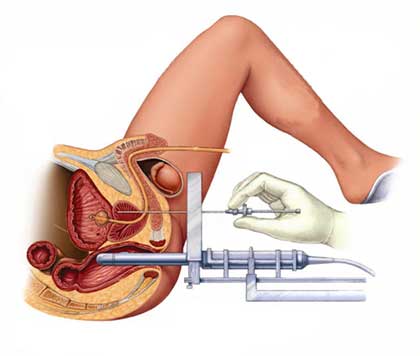 Needles are inserted into the prostate through the perineum. The needles are guided by ultrasound. 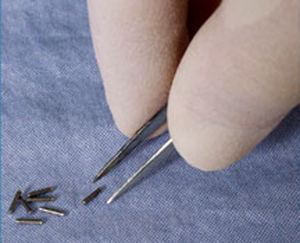 The radioactive pellets (or seeds) that are used in brachytherapy. They contain radioactive iodine encased in a metal shell.
Image from Wikipedia.